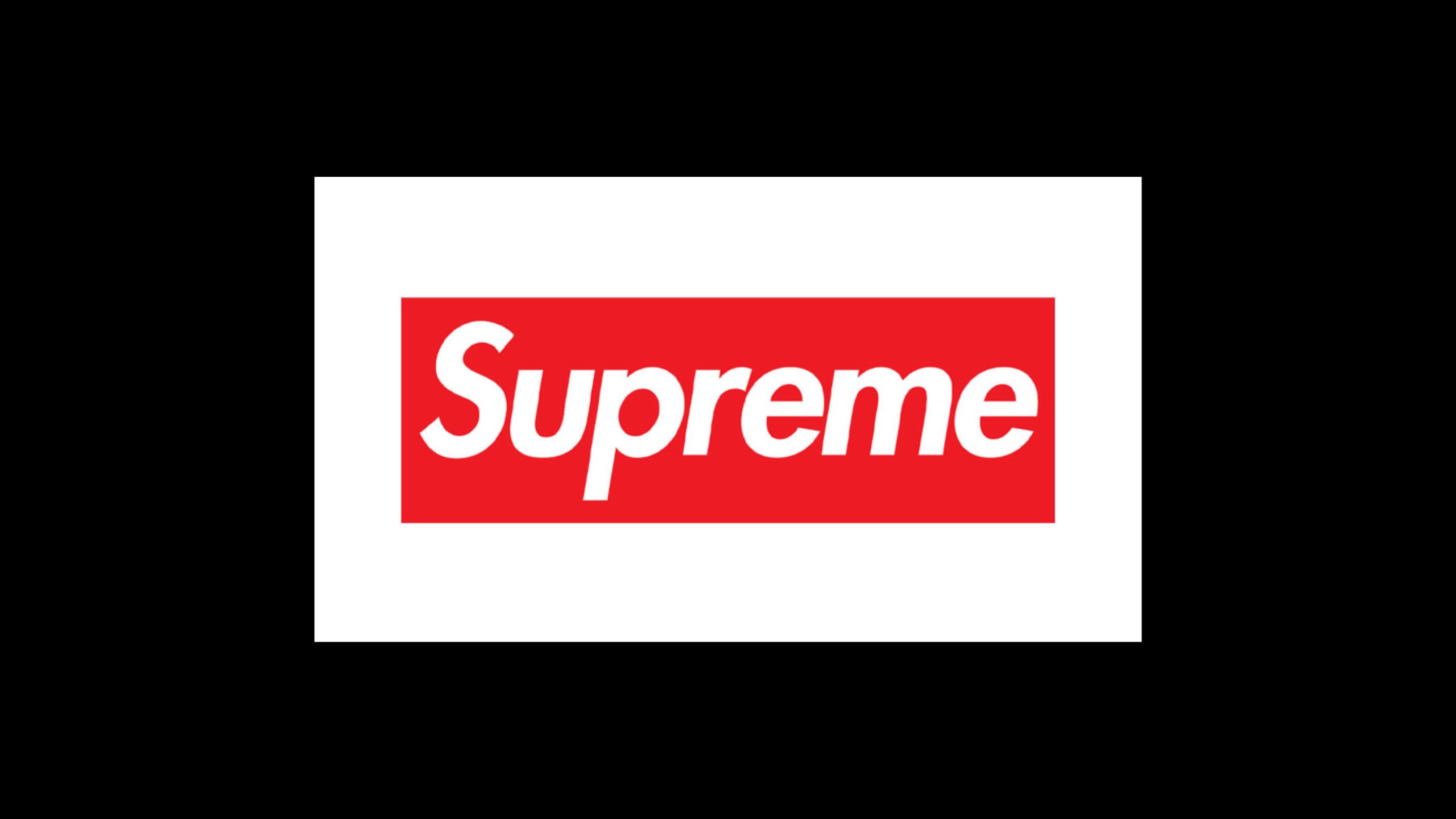 Ahhh, Supreme. Anyone and everyone know this brand. It could be for their ultra-hyped streetwear or just their eye-catching yet extremely minimalist logo in bold, Futura, oblique font over a bright red box.

The art style of the logo was heavily borrowed from the styles of the artist, Barbara Kruger. This brand is a risen mega-power and there’s no looking back for them.

Supreme is an American clothing and skateboarding lifestyle streetwear brand.

The Supreme brand produces clothing, accessories, and even the most random items like nunchucks, kayaks, and a brick. (Yes, you read that right. A literal solid brick stamped with their iconic logo.)

They also manufacture skateboards and have collaborated with different artists such as Takashi Murakami, Damien Hirst, and Dash Snow.

who started the Supreme brand?

The Supreme brand was founded by James Jebbia and launched in 1994 in New York City. It opened as a clothing store and skateboard shop combo on Lafayette Street in SoHo, Manhattan.

SoHo was known for its hip and trendy fashion scene, so it was a great place to start. Jebbia was originally from West Sussex, England, and worked in a Duracell company when he was a teenager.

He would spend his spare cash on trips to London and would shop for clothes in the “cool store”, which later became a type of model for Supreme.

At the age of 19, Jebbia moved to New York and worked in a skate shop. After a few years, he opened his store called “Union.” The store primarily sold British brands and other streetwear.

It eventually led to Jebbia meeting Shawn Stüssy, another big streetwear label in this present time.

Jebbia helped run Stüssy while having Union as well, both on the same street. A few years later, he decided to open his skate shop on Lafayette Street, and Supreme was born.

what type of brand is Supreme?

First and foremost, Supreme is a skateboard brand. Not because of the actual manufacturing of skateboards, but because of the skate culture and DNA that has been embedded in this brand from the very beginning.

It has become the seeds and roots of the brand and it still does purposefully today. Now, we can generally say that they are a clothing and skateboarding lifestyle brand, and not just your typical streetwear fashion brand.

The brand targets youth culture, especially skateboarding and hip-hop cultures. Their target demographic is 16-35-year-old males but presently has been also popular with females with the rise of female skate culture.

why is Supreme so famous?

Supreme may probably be just the most hyped brand out there, with loyal supporters and an unending amount of customers who are readily waiting for their Thursday morning drops every week.

In the beginning, the store was designed with a minimalist look. Videos would play to attract the attention of passers-by, and can still be found in their stores today.

The clothes were creatively arranged on the sides of the store, allowing a big open space in the middle for skaters to just skate in and move freely on their boards.

With this, Supreme felt like a cool hang-out place for the cool kids and skaters as they feel comfortable and good. Through the good ‘ole fashion word-of-mouth, the brand quickly made its way to more people.

It was also since the inventory was small because of both financial reasons and to avoid unsellable items and excess inventory. This fueled interest in the brand and gave it exclusivity, though not solely on purpose. This is why the morning drops had become the solution to this problem.

Today, the Supreme brand is so famous that they do not want overexposure. They even keep their advertising to a minimum. Their enormous fan base and the skateboard community have become their marketing alliances, as they remain authentic as a brand. With leaked information of future releases, the news just does a butterfly effect on people all around.

Supreme loyalists line up hours early during drop day. The brand launches a limited amount of new products and everyone just wants to cop a piece, whether it is a clothing variety or just the most outrageously random of items.

Additionally, Supreme has a unique sense of style that was one-of-a-kind. They have had many collaborations with other brands, as well as their connection to different cultural icons. They are more than just hype, they are the real deal cult classic.

why is Supreme so expensive?

There are plenty of reasons that you can come up with as to why Supreme is so expensive. The brand started with just simple t-shirts in a limited amount.

Followed by sweatshirts and hoodies, their products were of better quality than the others in the market. It was noticeable how people were willing to pay more for better-quality items.

So firstly, regardless of their design’s simplicity, you cannot deny the excellent quality of their products. Its hoodies are made of high-quality silky materials that are highly durable and heavier than what you usually see from other hoodies from similar brands.

Secondly, the brand has a lot of celebrity embracement. Without even partnering with the brand, countless celebrities can be spotted sporting Supreme in their everyday looks.

This shows how the brand has gained the respect of celebrities with its image and culture. Since celebrities are often looked up to, many people also would want to wear the same thing their idols are wearing.

This allows the brand to be at a higher price point as they have established enough credibility.

Thirdly, and probably the biggest reason is that they are just so hard to get. Supreme purposefully knows how to play with demand and supply strategically.

Not only do they have a one-piece-only policy, but they also limit the number of items they drop. They intentionally only supply fewer items than the demand, which adds a sense of exclusivity to the items.

People have to work hard to cop an item, adding to the allure of owning something from them. Many brands have copied Supreme’s strategy because the more exclusive an item is, the more in demand it becomes, also allowing for prices to go to all-time-highs, specifically through reselling.

It is truly outstanding how the Supreme brand has amounted to a hefty value throughout the years. The reselling culture of Supreme is a whole other venture, as people who can cop items wait for them to sell out online and in stores, then post them on websites like e-bay and Instagram.

Prices can reach up to 30x the retail price, showing the clear power the brand holds with its impressive after-market value. Despite all these reasons, buying and owning a Supreme item is also joining its culture and understanding the history behind the hype.

is Supreme owned by Louis Vuitton?

The short answer is no. Supreme was never owned by LVMH, the conglomerate that owns Louis Vuitton.

Though they have partnered with Louis Vuitton for different collections. The VF Corporation has acquired Supreme in 2020 for a $2.1 billion all-cash deal, with Jebbia still as CEO.

VF Corporation handles brands such as Vans, The North Face, and Timberland. Before this deal back in 2017, Supreme sold a 50% stake for $500 million to the Carlyle Group.

is Supreme a luxury brand?

This may still depend on the person, but Supreme can already be viewed as a luxury brand. With its aforementioned collaboration with Louis Vuitton and its demandingly high resale value, it has proven to be up the ranks with other luxury brands in the market.

What started as a small skate shop in Manhattan, now caters to both luxury and streetwear markets globally.

Streetwear has been slowly making its way into the world of luxury, and Supreme is definitely the brand that made this breakthrough.

This is probably the most iconic T-Shirt in the world of streetwear, originating in 1994. It is the “IT” T-Shirt if you will.

It is originally a plain white tee with its iconic box logo plastered in the middle.

There have been several versions of this tee since then, from collaborations with Louis Vuitton, BAPE, and so on.

We weren’t kidding about the Supreme bricks. As ridiculous as this is, it is also ever so iconic and resells for over $1,000. It is a plain brick with a box logo design.

These stickers could be found on skateboards, laptops, and even subway stations back in the early 2000s.

A sticker came with every purchase and there are many collectors out there for different variations and designs of Supreme stickers.

This was an iconic collaboration as back in 2000, Louis Vuitton wanted to make a case against Supreme for their use of a trademark pattern.

Then in 2017, they went to collaborate with the brand to showcase the most iconic (and most expensive) Supreme item, which was a trunk sold for $125,000. It featured a bright red trunk with Louis Vuitton patterns and a Supreme logo.

Today, Supreme is still definitely like no other. Its massive rise from being a somewhat younger company is incredibly impressive.

The brand has paved way for streetwear in luxury. This brand is here to stay, with plenty more jaw-dropping collaborations and one-of-a-kind designer items.