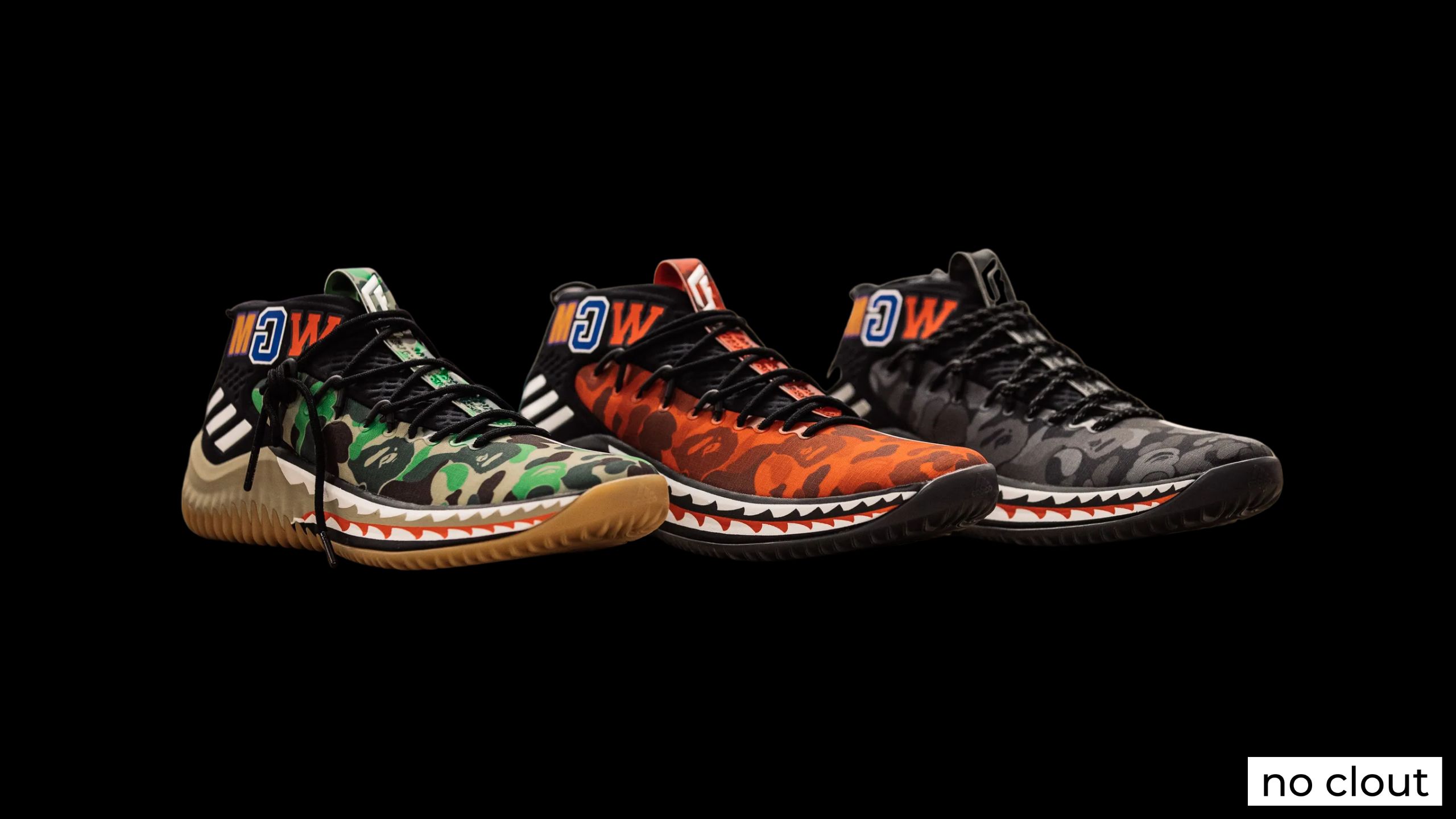 The BAPE X Adidas Dame 4 is just another of the iconic collaborations there is in the streetwear and sports world. It was released back on February 18, 2018. The Dame sneakers series are actually for an NBA player – Damian Lillard from the Portland Trail Blazers.

He is a well-known point guard with exceptional playing abilities.

What is the Dame 4 Bape?

Aside from the obvious influences of BAPE’s aesthetic, according to Lillard – the sneaker was actually inspired by Lil Wayne. Lillard’s fondest memories of BAPE was seeing Lil Wayne in oversized camo hoodies during heyday.

Lil Wayne had also helped set the trend of hip-hop fashion when he was on the cover of Vibe, where he sported a full BAPE look. This helped create the loud design and memorability of BAPE as a brand.

It touches on nostalgia and leans toward forward-thinking of the brand’s future. You have seen Lillard in and out of the court in his Dame 4 Bape sneakers.

Features of the Dame 4 Bape

The sneakers are nothing short of a masterpiece collaboration between two famous brands – Adidas and A Bathing Ape (BAPE). Physically, it is a loud-looking shoe and could probably be the loudest shoe in one’s collection.

The Dame 4 Bape, from its name, also carries the silhouette of Adidas’ Dame sneakers. The majority of the upper sneaker is a textured material with the iconic BAPE camouflage print in green. You will also find the signature ape head featured throughout the print of the sneakers.

The toebox features massive eyeballs of BAPE’s well-known shark face design. The sneaker is constructed as a full one-piece, which means the tongue is also connected to the entire shoe itself. The tongue is made of a black neoprene material that is overlayed with a strip of BAPE’s camo print in leather with Damian Lillard’s logo on top in white.

If you flip to the other side, you will find Adidas’ logo as well. The shoelaces are black rope-style laces, a classic but industrial look. A unique point of the sneaker is the holes of the shoelaces which start as regular eyelets and then become rubber-like lace cables with a pull-out effect.

The back end of the sneakers and the ankle collar is also made with the same neoprene material with the Adidas triple striped logo on the lateral heel in white. Above, you will find the “WGM” design in a collegiate font.

This stands for “World Gone Mad”, an iconic line from BAPE. The back heel also has a tiger logo for an added touch to the already loud design.

On the center back of the heel, you will see a strip of the green camo print with the letters “YKWTII”, which stands for “You know what time it is” and has a small heel pull tab. The “YKWTII” is an iconic reference to Lillard’s ability to take over a game. The inside of the shoe is black with removable insoles with the same green camo print and BAPE’s head logo and Adidas’ logo on each foot.

The midsole is a full-length Adidas bounce midsole. It uses the bounce technology of Adidas that is more supportive and rigid, great for playing basketball. It provides a sock-like comfort, enough stability, and breathability.

The midsole is in beige with the well-known shark teeth graphics. The bottom of the shoe has a gum outsole with the same traction pattern as all the other Dame sneakers. The bottom also has triple stripes in white.

The sizing of the sneakers is a tiny bit on the bigger side and a little bit on the more narrow side, especially if you have wide feet. It is not as easy to wear and not slip on because the neoprene ankle area does not have a good stretch and it is of a thicker material.

It is not as flexible as other sneakers and does not mold well to the feet, as compared to the prime knit used in the Ultraboost sneakers.

Colors of the Dame 4 Bape

The Dame 4 Bape comes in three colorways – green camo, black camo, and red camo. The most common one, but still very limited, and easily the most iconic due to its color, is the green camo version.

It is very well-connected to BAPE’s signature branding. The black camo colorway was also made available to the public, a more muted option if you find the green version too loud. Lastly, the red camo colorway is an exclusive design that was only meant for family and friends.

What to Wear with the Dame 4 Bape?

It is clear that the Dame 4 Bape is a statement sneaker – with its loud designs and eye-catching colors. This shoe was meant to be a talking piece with anyone you meet, a great icebreaker of sorts.

There is no one perfect way to style these because as always, fashion is all about creativity and individual style. Generally for all colorways, it is simple to just throw on a monochromatic look and let the sneakers be that added pop of color and personality to your outfit.

Lighter monochromatic like white and beige will definitely give the sneakers an extra boost. You can also choose a fully black monochromatic outfit with the black colorway for a sleek and understated look.

For men, the camo prints are a great design to show that fierceness. Wear an oversized hoodie or graphic sweatshirt with cargo pants for a classic streetwear look with a hint of grunge.

Another option is toning down your outfit to make way for the sneakers. Try a crisp white buttondown with distressed denim jeans. A fun option can also be matching the sneakers with another piece of your outfit. If you have a camo print jacket, hat, or shirt in the same shade or design – it creates an effortlessly coordinated look.

For women, a badass fit is a perfection with these sneakers. Style a fitted black tee with leather pants and add metallic details like buckles and accessories. Add on a baseball cap or bucket hat to elevate the look further.

Another route to take is a juxtaposing outfit. Pair the masculine silhouette of the shoes with a feminine look. Try a fitted white corset top with flared black pants. Add in textures like satin or velvet and mix it up with accessories like a vintage baguette bag.

Overall, the Dame 4 Bape sneakers are a showstopper no matter the colorway and what you wear. Go with a style that works for you – whether it is comfy athleisure or a badass fierce persona.

How Much is the Dame 4 Bape?

The Dame 4 Bape retails for $150. Since they are limited and are not available retail anymore, the sneakers resell on several other websites from $275 and can reach over $500.

Where to Buy Dame 4 Bape?

The Dame 4 Bape sneakers were originally released in Los Angeles at 747 Warehouse St. and select Adidas retailers. It was also launched on Adidas’ website.

Currently, you will not be able to find the sneakers anymore there. Instead, you can purchase them on resale market platforms such as StockX, Grailed, and GOAT. These platforms mostly focus on menswear and streetwear. Be sure to expect an increased price range.